This is the eight year of the Bowman Scout's Top 100 (or Topps 100 or Top 100)  Despite bringing several top prospects to the majors or trading them off, the Cubs still placed five players on the list.  Here they are from bottom to Top. 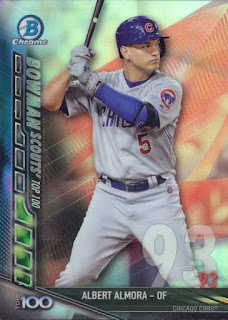 #93 Albert Almora. This one really confuses me. The guy spent about half the season with the big club in 2016 and scored the go-ahead run in the 10th inning of game seven of the World Series.  Only the 93rd best MLB prospect?? 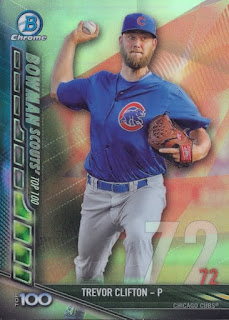 #72 Trevor Clifton  He recorded 129 strikeouts in 119 innings in High A ball last year.  Will he be ready to make the rotation in a couple years when Lester is out of gas, Arrieta has signed elsewhere, and Lackey is retired? 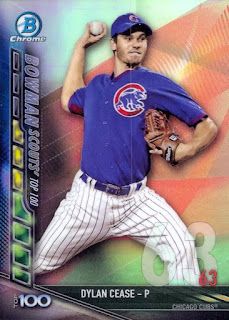 #63 Dylan Cease  He hits triple digits with his fastball.  Another hopeful for the rotation in a few years. 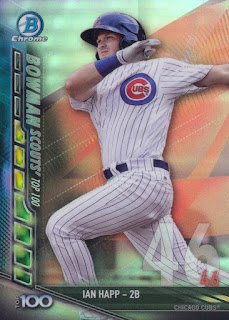 #46 Ian Happ  He was very impressive in spring training and got off to a good start in AAA.  A recent thumb injury has him on the DL.  The big question is where would he play when he gets to Chicago? 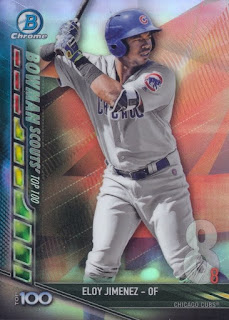 #8 Eloy Jimenez Another touted prospect with no where to go.  Maybe he'll be ready when Zobrist is done.
Posted by Wrigley Wax at 7:00 AM