I spent some time looking over the multi-player rookie cards in my Cubs Topps collection.  The main run was from 1964 through 1982.  Each year had at least one card, some had several.

My goal was to come up with the best card.  By best, I mean the card with the players that had the best careers.  Often the multi-player cards had one good guy along with one or two busts.  The best card would have nothing but good guys.

It was easier than I thought to come up with the best card.  There was one that clearly had two good guys, and the good part of their careers was with the Cubs.

But first, the second and first runner-ups; 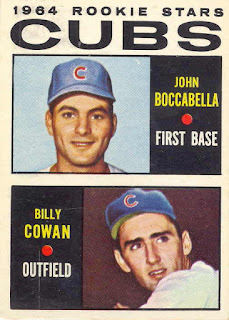 Third place goes to John Boccabella and Billy Cowan.  Both had significant major league careers, though neither did much for the Cubs. 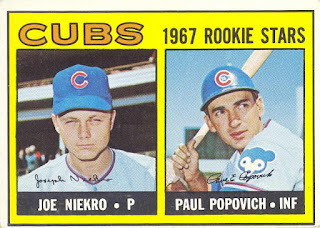 Second place goes to Joe Niekro and Paul Popovich.  Niekro's career went for 22 years, but just the first two were with the Cubs.  Popovich spent several years as the Cubs main utility infielder.  His Cubs contributions are what earned this card second place.

And the big winner?  As I said earlier, it was pretty easy to pick out: 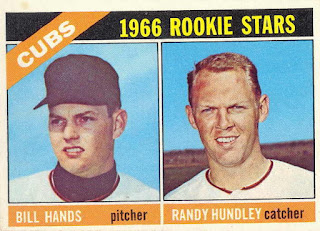 Hands and Hundley were major players for the '69 Cubs.  A twenty game winner and an All Star on the same card.  The only downside with the card is that they are both in Giant uniforms.  What a steal of a deal that was!