I need to pay better attention to the checklist.  Turns out I miss a few, though I could make a case for not including them.

In both Series 2 and Update, Topps include photo variation cards of some Hall of Famers.  Ernie Banks and Ryne Sandberg have cards in Series 2 and Mr. Cub was also included in Update.  Since they are variations that aren't on the actual checklist, I could argue that they don't belong in the team set.

But how can I pass up cards of two of the greatest Cubs?  So I've gone ahead and picked them up. 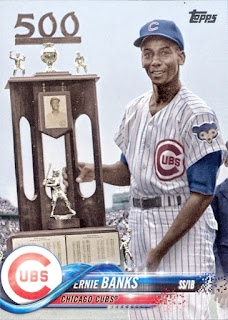 This is the Update Ernie.  It is #US157, meaning Ernie is paired with the actual #U157 which belongs to Francisco Lindor.  No, that's not a typo.  Mr. Cub is paired with a Cleveland Indian.  Yes, I know that they are both shortstops.  But really, pairing Ernie up with anyone other than a Cub is just plain wrong.

The picture on the card is from May 30, 1970, when Ernie was honored by the Cubs for hitting his 500th career home run.  I've never seen a color version of picture before, only black and white.

I've been able to prove definitively that the picture has been colorized by Topps.  They doctored up the black and white version.

And they screwed it up as only Topps has a way of doing.

Can you spot their error?

I'll have more on that tomorrow.