I mentioned last week that I have three more 2018 Cubs and showed the first of the three.  Over the weekend the second arrived in the mail. 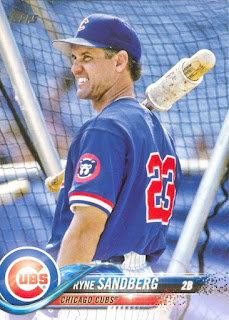 This is the photo variation card of Ryne Sandberg from Series Two.  The card is #500, which is Kris Bryant's card.

The picture shows Ryno taking BP at Wrigley sometime in 1994-1996.  I can say that because of the bear on his shoulder.  Those were the only years that version was used.  I looked through all of my Sandberg cards and didn't find this picture on any others.  Kudos to Topps for not recycling.

As I said earlier, this is card #500 in the set.  Those x00s are typically reserved to the big guns.  Bryant qualifies and it's nice to see Ryno with one too. But how many times during his playing days did he get a X00 card?

Not as often as you would think.  They guy was the best second baseman for years, but Topps didn't give him much respect. 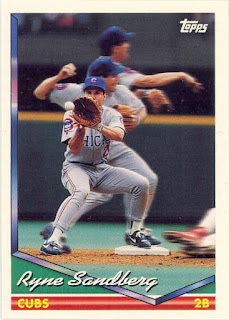