I found and oddball Billy Williams card to add to the player collection. 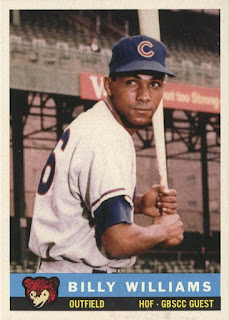 This comes from a set put out in 2008 by the Greater Boston Sports Collectors Club.  The club hosts a huge card show each year.  The club gave out a 35-card set at the show.  Billy was the only Cub.  The card lists Billy as a guest, so I'm assuming he was at the show to sign autographs, 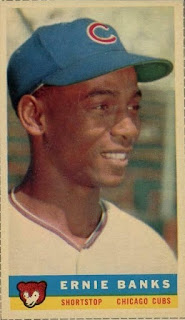 The design they used was based on the 1959 Bazooka cards.  The cards look pretty similar though the dimensions are not the same. 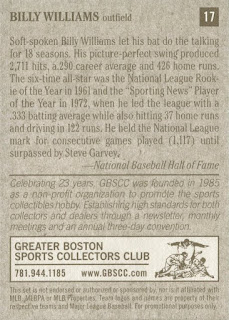 The back has a biography of Billy that is taken from his plaque in Cooperstown.

This is what I found to be the most interesting thing on the back of the card.  The club included this disclaimer regarding their lack of a license to make the cards.  I found a source that said just a few hundred sets were made, so it may not have been worth the effort by MLB or the players to go after the club for using the logos.  I wonder how Topps felt about having their design being borrowed.

A year after this card came out Topps went after Upper Deck with both barrels over their non-MLB licensed cards.  I guess UD was more of a threat than the GBSCC.