I thought they just sold bats.  I didn't know that Louisville Slugger was also in the glove market.  Not only did they sell gloves, but they also attached a baseball card to each glove.  The cards were of players on their "Advisory Staff."  There were 18 different cards on the gloves from 1982 through 1989.  The cards are undated, but you can get an ideas as to when they were issued based on the career highlights mentioned on the card backs. 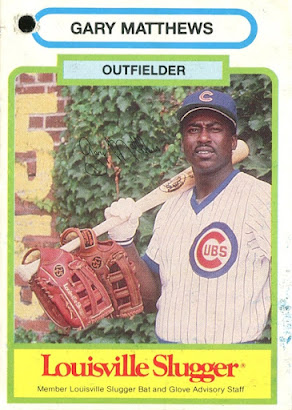 Notice the hole punched in the upper left corner.  That was used to attach the card to the glove.

I don't know about you, but I don't think I'd put a three-time league leader in errors on my glove advisory staff.