Topps brought back the Attax brand for the first time since 2011.  Attax is Topps attempt to get into the gaming market as Attax plays similar to card games like Pokemon and Magic: The Gathering.  It didn't really do much a decade ago.  I wonder what led to the decision to bring it back now?

The set is an on-line exclusive.  There is a starter set of 30 cards and then booster packs are sold weekly. 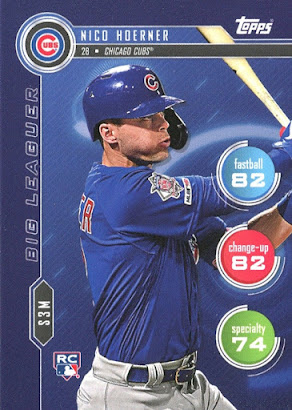 Nico Hoerner was the only Cub among the 30 players in the starter set.
Among the booster packs released, only one Cub has shown up, Yu Darvish. He was in the first pack, which had a print run of just 216.  I have yet to see his card show up on Ebay.  I'm afraid with a print run that low, I may never see the card.