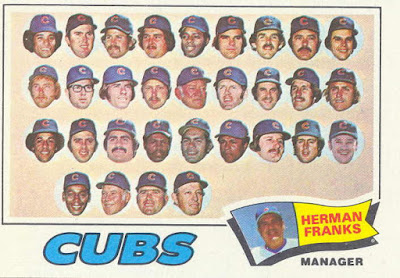 Today we're up to the 1977 Floating Heads card.  Once again Topps had to do some re-configuring of the original picture. 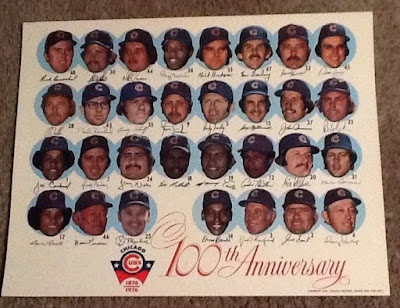 It was just a matter of moving a few guys from the bottom row of the 1976 photo.  Dave Rosello was moved to the top row, far left,  For the second row on the card they split the original second down the middle and put pitching coach Marv Grissom in the empty middle spot.  WIth the third row Topps added Jim Marshall to the far right.  The other four in the last row of the original were just moved farther to the left.

Notice again that Ernie Banks was included on the team picture even though he had no role with the big league club.  Instead, he was a roving instructor, working with the minor league teams.

The lineup on the card: