I've got another rule-following relic: 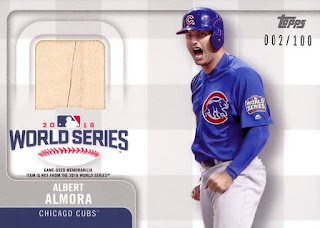 This bat card for Albert Almora is from Topps 2017 World Series Champion Relic set.   The irony is that in small print the card says that the game-used memorabilia is not from the World Series.

I thought briefly about going after all of the cards from this set.  But since I have relic cards from all the other players in the set, I decided to pass.  Adding the Almora was all I needed to do.

Almora is slotted to platoon in center field this year.  It will be interesting to see how he does and how much Dexter Fowler will be missed.

WIth this, I now have 81 relic cards that show a player as a Cub during a season they played for the Cubs. Of them, 13 are on the Cubs roster right now.  That is probably the most I've had of current players at any one time.  And if you add Chapman, Fowler, Hammel, and Soler, that would make 17 players from the World Series team.