Some Work on the World Headquarters

What a glorious streak of good weather we've been having.  The temperature has been in the 50s and 60s the past several days.  That is totally unheard of for Michigan in February.

Add the nice weather to a long President's Day weekend, and it means that I've had some time to work on a project.

If you remember from this post in November, Mrs. WW and I decided to do a little work to the outside of our house.  The nice half-brick front wall was going to get a little taste of Wrigley.

My job was to make and install the house numbers.  I made the numbers in early December, but didn't think I'd be able to paint or install them until the spring.  But the warm spell we've been having gave me an early start. 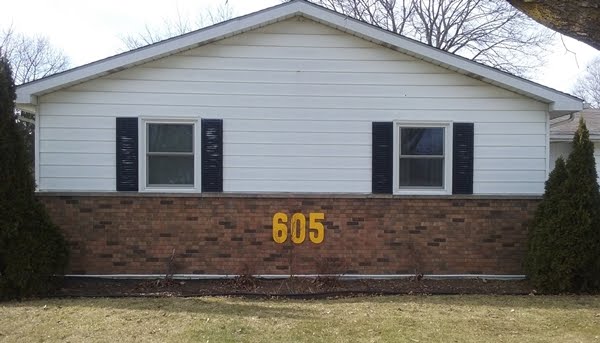 Voila!  Yellow numbers have been added to the front of the house.  The numbers on the Wrigley Field walls are painted directly to the wall.  I didn't want to do something that permanent.  Instead, I made mine out of plywood and screwed them into the brick.  I used actual pictures of the numbers, blew them up, made patterns, and cut out the pieces.  Mine are three fourths the size of the actual numbers.

Now we just need the ivy to grow.
Posted by Wrigley Wax at 7:00 AM