I'm usually one of the last ones to this party.  I checked the local Walmart and Meijers twice since Wednesday, looking for 2017 cards.

Nothing, as usual, unless you're looking for 2016 series two.

Luckily, Mrs. WW and WW Jr. were heading to Kalamazoo (a 50 minute drive - not worth it for me to just go for a couple packs) to do some shopping.  They added Target to their list of stops and got some! 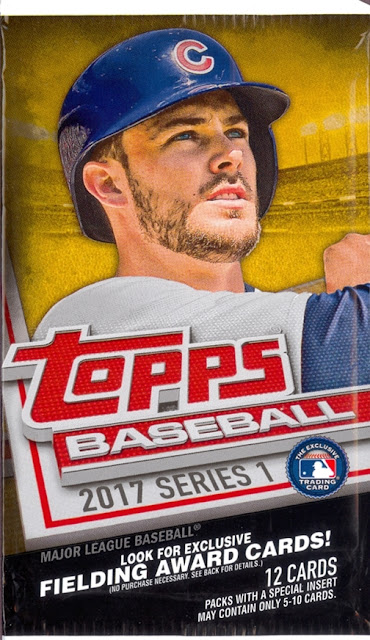 I got three packs.  One goes on the display, two get ripped.

This is the first time a Cub player has been featured on the front of a Topps Series 1 or Series 2 pack.   Yankees, Cardinals, Red Sox, and Phillies seem to have the most players over the years.  I'm happy to finally see Cubbie blue on the cover.

As far as the ripping goes, it was nearly a complete bust.  The first pack netted no Cubs.  And with the second pack, it wasn't until I got to the middle that I found this... 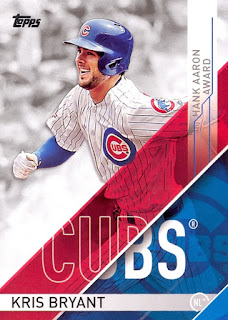 ...Kris Bryant card.  It is from the MLB Awards insert set, which is a Target exclusive.  Bryant actually has two cards in the set. This one is for winning the Hank Aaron Award.  The second card is for being named NL MVP. My supplies Brentandbecca doesn't buy retail cases, so the master set I'll be getting from him won't include this card.  Knowing that, I already picked up both of the Bryant award cards from another seller.  That makes this my first double of the year.
Posted by Wrigley Wax at 7:00 AM