Panini's Chronicles set has got to be one of the oddest, ever.

The Chronicles base set contains a total  of 60 cards.  Two are Cubs.  So far, so good. 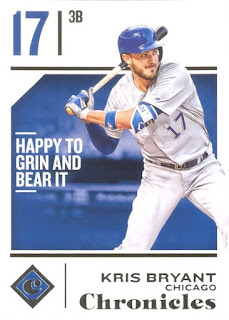 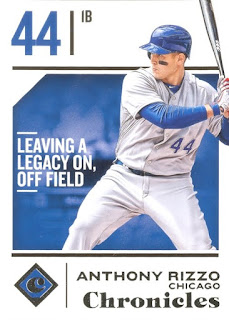 The  cards are fine, nothing too bizarre, other than the fact that there aren't any logos.

But after this, the set goes off the rails.

The set doesn't have the usual six or seven inserts.  No, it has 18.  Yes 18 insert sets, and those are just the regular type cards.  Of course you have to add relics and inserts.

And how many cards do those 18 sets total up to?

Yes, after collecting the base set of 60 cards, you get to chase after another 485.  One of the insert sets, Spectra, has 100 cards on its checklist.  I don't recall an insert set having 40% more cards than the base set.  That is just nuts.

I did make a list of all the Cubs among the inserts.  They were mostly of Bryant and Rizzo, 12 for Bryant and 6 for Rizzo.  The only set with other Cubs is the 100 card Spectrum set, which has Baez, Caratini, and Ryno.

I have decided not to bother going after 21 Cubs inserts.  The two base cards are good enough for me..
Posted by Wrigley Wax at 7:00 AM