A couple weeks ago I mentioned that I had a Bill Buckner Wiffle disc coming, but it was delayed.  After spending a week at one post office in Arkansas, it finally got moving again and arrived. 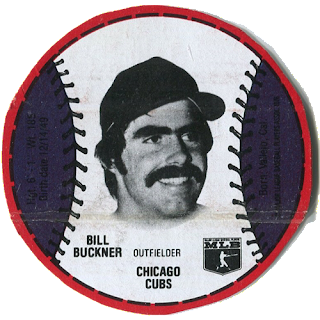 Billy Buck looks happy!
The odd thing with this disc is the way it was originally packaged by Wiffle.  In fact, the 1979 Wiffle discs came in several different ways.
The Buckner disc is a sleeve disc.

This is the sleeve that I purchased.  It was placed around those skinny yellow wiffle bats. Notice the price tag, too, for $1.69.
The disc has to be cut out.  I left a pretty big red edge. so you can easily see the disc's black-dotted border.  Also notice the fold on the sleeve as it goes through the disc in two different places.  I wonder how PSA handles grading for this?  Is it impossible to get a 10 because of the folds, or do they take that into consideration when grading?

The sleeves have two discs, and Dennis Eckersley is on the opposite side of the Buckner disc.  Wiffle did a little foreshadowing, because five years later, in 1984, Buckner was traded to the Red Sox for Dennis Eckersley.