In 2003, for the third consecutive season, the Cubs and Topps combined to produce cards for the Cubs to give away at Wrigley Field. As in the past, the cards were replicas of past Topps cards. They were also numbered, to 20,000 and included a special Wrigley Field logo.

The number of giveaway dates shrunk by five, so there are only six cards. Another difference is that there were a couple of "up and coming" Cubs among the six. In the previous two seasons, the only current player featured was Sammy Sosa; the majority were stars from the past. The two rising Cubs were no Sammy Sosas. I'll start with them: 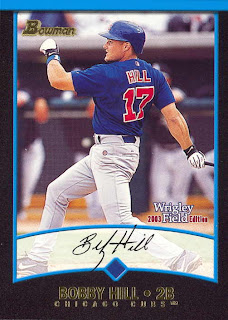 Bobby Hill, given away on May 3, this card was his 2001 Bowman card. Hill was a bust and was traded to the Pirates later in the 2003 season for Aramis Ramirez. Thank you Pittsburgh! 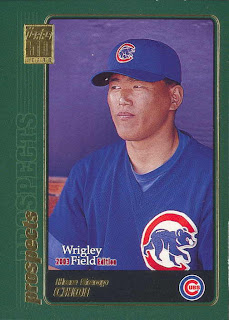 This card, given away on May 7, was a variation of Hee Seop Choi's 2001 Topps rookie card. Here is the original 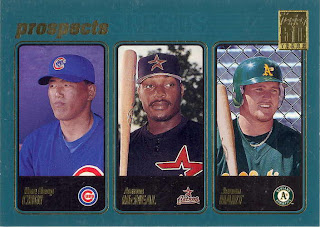 They Hee Chopped out the other rookies and just left in Choi. In 2003 Choi was doing OK until he got hurt in a June game against the Yankees. He never really returned to form and after the season was traded to the Marlins for Derrek Lee. That was another good deal!

Now on to the four Cubs who weren't busts! 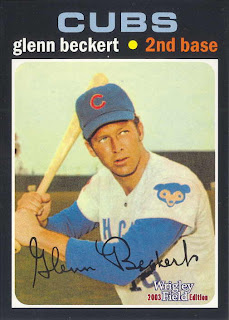 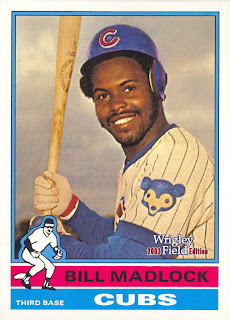 Bill Madlock's 1976 card was given away on August 1. In 1976, he won his second consecutive NL batting crown, hitting .339 and finishing 6th in NL MVP voting. 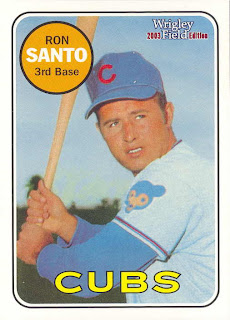 The 1969 card of Ron Santo was given away on August 3. Santo led the ill-fated '69 Cubs in RBIs and appeared in his sixth All Star game out of the previous seven seasons. 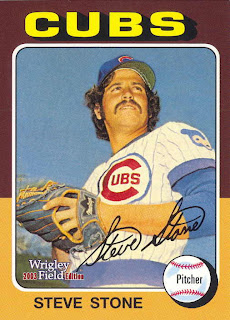 The Cubs gave away the 1975 Steve Stone card on April 12 because Steve Stone was the Cubs TV color man. He had his best season of his three with the Cubs in 1975, going 12-8.

These cards are the last the Cubs have ever given away, which is too bad. I hope they return to a card giveaway in the future.
I'm still trying to hunt down three more of the 2002 giveaway cards (Dave Kingman, Lee Smith, and Don Cardwell), and once I have them, I'll get them up.