When I bought my 1948 Cubs scorecard, the seller also included a 1947 scorecard.

But when I say scorecard, I really mean score card.  Nothing more, nothing less; just a card for scoring the game. 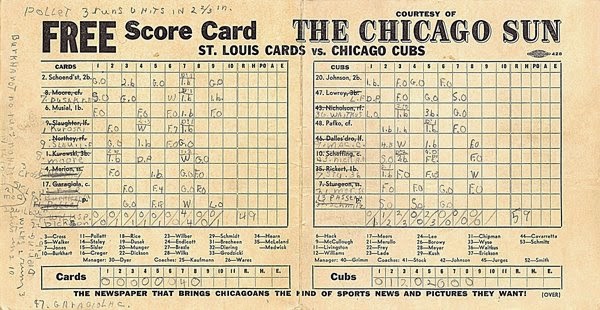 Apparently, the Chicago Sun (this was a year before the Sun and Times merged into today's Sun-Times) handed out these cards to fans before they entered the ballpark.  I'm assuming the giveaway was outside the park; I can't imagine the Cubs would have allowed these to be given to fans inside that park, taking away from the Cubs' program sales.

The Sun was just looking for a way to some goodwill among the fans at the game.  The free card meant you could spend a dime on something else in the park instead of buying an official program.

This giveaway also tells me that lots of people kept score at the game.  If the Sun-Times gave a way free scorecards at a game today, most would end up on the floor.  People don't bother much with keeping score anymore.

The date of the game is July 4, 1947.  Almost 45,000 people jammed into Wrigley Field for a holiday doubleheader against the Cardinals.  It was the second-largest crowd of the season, surpassed only by a crowd of 47,000 when Jackie Robinson made his Wrigley Field debut in May.

The picture above is from game one, won by the Cubs 5-4.  Since this was a doubleheader, the Sun printed a both sides of the card.  Here is what game two looked like... 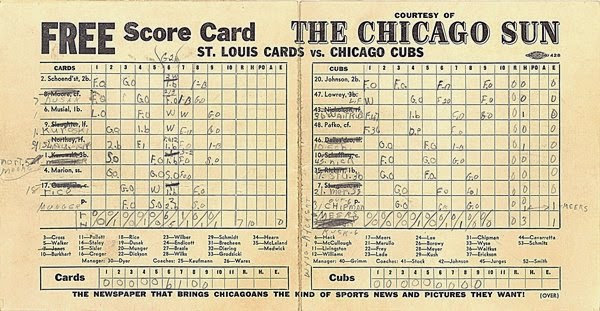 No Otis Shepard with this card, no concession information; just a pure score card.
Posted by Wrigley Wax at 7:00 AM