One autograph card and one relic card for any Cubs player that had an auto or relic that shows them as a Cub during a season they played for the Cubs.

That's the collecting rule I adopted a couple years ago to keep me from feeling the need to get all the relics that Topps was putting out.

Infielder Arismendy Alcantara has been with the Cubs for about three weeks now.  He came to the team when Darwin Barney went on paternity leave.  Alcantara had a very strong start and soon Barney was gone.

Right after it was announced that Alcantara was coming to the Cubs, I checked Ebay to see if he had any auto or relic cards released this year.  If there were any I would need them to follow my rule.

It turns out that he had an autograph and auto/relic card in Bowman Inception.  Prices were pretty cheap and I grabbed both.  Turns out it was a good move to get them right away.  Since his strong start, the prices have been going up. 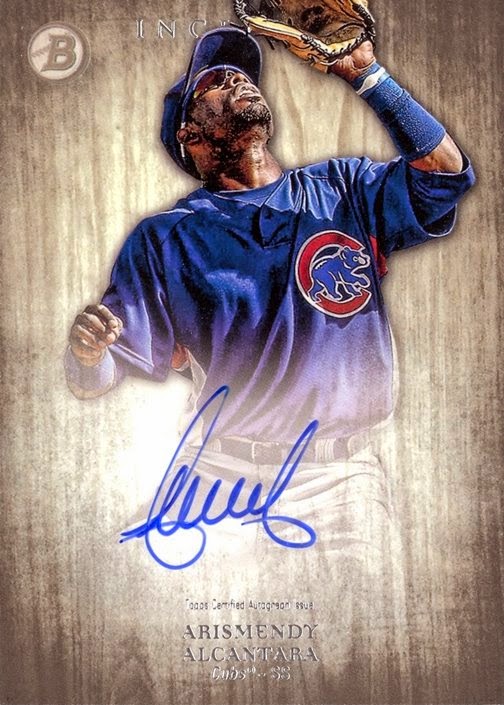 The autograph card has an on-card signature. 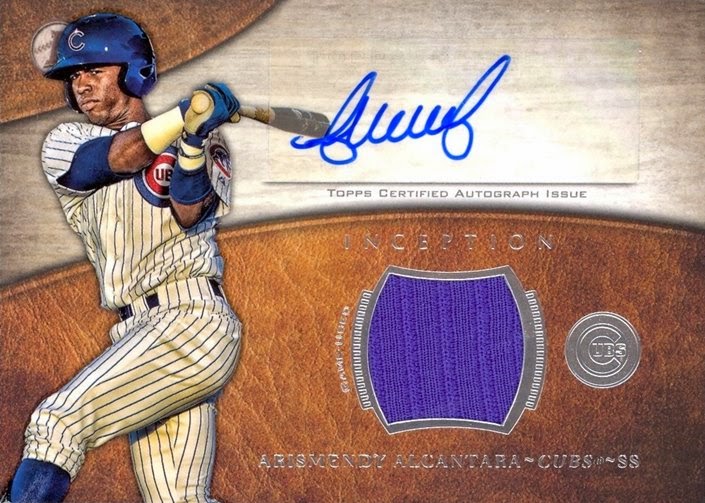 That's a sticker auto on the dual card.  And the jersey would be MLB game worn, since the card came out before his MLB debut.  I can live with both of those issues.

By my count, Alcantara makes player number 107 that meets my rule.  I've got 106 of them.  The missing one....Kosuke Fukudome.  I've got a non-certified auto of him, but the certified version is rare and expensive and probably will never be added to my collection.

Tonight, both of those numbers could change.  One of the long-awaited prospects, Javier Baez, has been called up and may play in tonight's game.  If he does, you can add one more both the autograph and relic list.  Though he has 2014 relics and autographs, I will probably have to wait on him.  The stuff he has now is what the prospectors chase and they typically chase me out of the market  I may have to wait a while for the prices on Baez items to be affordable.