I'm writing this about an hour and a half before the start of Game 2.  When you read this I hope the series is even at one game each.  With Jake Arrieta on the mound, this is as good a chance as the Cubs will have to pull even.

I just wish the game didn't start so late. There's just too much time before the start to sit around and get nervous.  I miss Central time.

I've spent the past 17 years in the Eastern time zone after spending the first 36 year of my life in the Central.  I'm still not used to the later Eastern times.  To me, the Central time zone is right in the sweet spot....not too early and not too late.

A Sunday in football season should be church and then a quick lunch before the Bears at noon.  Waiting until 1:00 to start?  No.  Time is wasting!

And I feel sorry the those of you out west.  You get football at 10 or 11 a.m.  That's too early.  And your prime time shows have already been shown out east before they run for you.  Even the new shows are reruns.

I get that MLB starts the games at 8:00 for maximum TV exposure and dollars.  I just wish I didn't have to kill that extra hour before the start.

I'll look at some cards to pass the time. 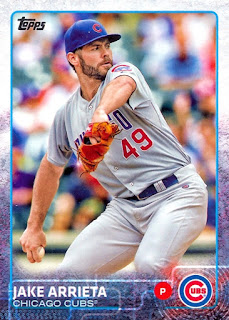