An article I was recently reading shocked me.

It was talking about what the Cubs need to do over the off-season (there's plenty!) and one section was dealing with third base.  When they let Aramis Ramirez go, Ian Stewart was brought in to take over.  That didn't work out so well.  Last year it was third base by committee.  But here's the shocker...the article said that the Cubs would have a hard time replacing the 30 home runs hit by their third baseman.

So I did some digging around at Baseball Reference.  I couldn't split the stats strictly by position, but as best I could, here's what I  came up with...

Valbuena, Murphy, and Ransom played a few games at other positions, but with their numbers you can pretty much figure them as third basemen.

Except for the average, the numbers compare very favorably with what Aramis Ramirez did while he was with the Cubs.

But I'm pretty sure that  ValbuenaMurphyRansometc. is not what the Cubs are looking for over the long haul.

And how many of the six third basemen had a Cubs card in any 2013 product?

One player, one card. 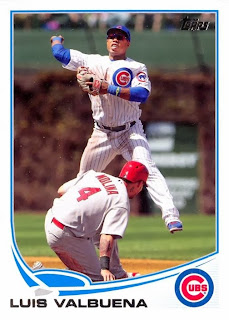 No respect for the six-headed 30 homer monster that is the Cubs third basemen.
Posted by Wrigley Wax at 9:00 AM