This has bothered me for a long time.

Topps had the multiple player rookie cards for many years.  The first ones came out with the 1962 set and they featured four players from different teams.  The team-specific cards made their first appearance in 1964.

The title Topps used on most of these cards was "Rookie Stars."  Even as an eight-year-old rookie collector in 1969, I knew that it was a stretch to call them "Rookie Stars."  Most of the cards featured players I never heard of and would never hear of.

I always wondered what criteria Topps used to decide who they would place on the rookie cards.  There was no Baseball America Top Prospect lists back in the '60s and '70s.  Did they consult the beat writers?  the teams?  the magic 8 ball?

I understand that predicting player performance, especially in baseball, is not an easy thing.  But how could Topps miss so often?

I was looking at my '60s binder and grabbed the rookie cards from the 1965 set.  I looked at the write-ups on the back to see if they had something obvious as to why the players should be placed on a card. 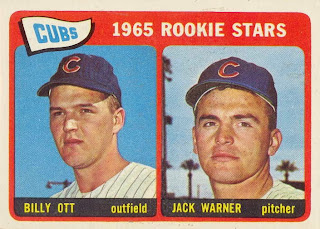 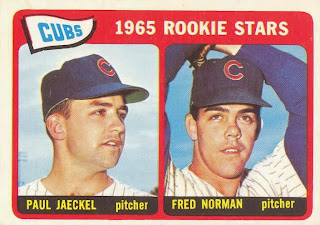 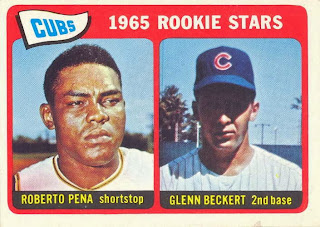 There were three rookie cards, six players.  Only one of the six had a good career with the Cubs, Glenn Beckert.  Fred Norman ended up with a decent career, but his didn't take off until the mid-seventies, several years after this card.  Roberto Pena had a mediocre career with several other teams after his brief stint with the Cubs. The other three were nothing better than cup of coffee guys.

I found the write-ups on the back to be even more interesting.  Keep in mind that the cards are from 1965.  As you read the write-ups, notice how many highlight career events from seasons two, three and more years earlier.  If the guys weren't doing anything noteworthy in recent seasons, why were they considered rookie stars?

Some interesting facts...Jaeckel's card says he won ten games last year...true, but he lost a whopping 18 games.  Talk about selective editing...For Jack Warner they had to pull up accomplishments from 1959...Look again at Glenn Beckert's...the card calls him a strong armed outfielder, while the front correctly lists him as a second baseman...oops!

Of course I could be overlooking something else...maybe the Cubs farm system was so lousy that these guys were the best that Topps was able to come up with!
Posted by Wrigley Wax at 9:00 AM