Very rarely will a card show a pitcher batting.  That makes sense.  Most pitchers are not known for their prowess at the plate.  And in today's game, it's only the starting pitchers that even get some at bats.  In fact, only one Cub reliever, Brooks Raley, had a plate appearances during the 2013 season.

But for some unknown reason, in 1992 Fleer decided to show Cubs pitcher Les Lancaster at the plate. 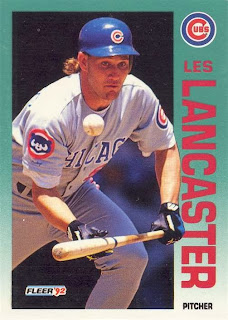 Not only at the plate, but bunting.

Well, not really bunting.  More like failing at bunting.

You usually don't want the ball to go straight up.  Down is the preferred direction.

I can hear the conversation on TV between Harry and Steve Stone:

Harry: Lancaster squares to bunt...He pops it up!  Boy oh boy, you would think that a player with only one job to do at the plate would be able to do it the right way.

Steve: And for all you youngsters out there, make sure you keep your eyes on the ball and watch the ball into your bat.  Don't look up.