A couple weeks ago Topps released the 100 card set Five Star.  The highest of it's high end sets, this goes for $400 per box of six cards.  When you pay this much, you don't get a foil pack, you get a box.

Five Cubs are on the checklist, Fergie, Ryno, Andre, Ernie, and Billy.  I have player collections of all except Fergie, but I only went after the Billy Williams. 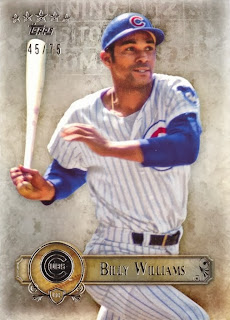 This is the base card.  You can see that its numbered /75.  The picture looks to be early '70s Billy. 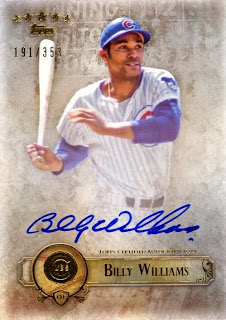 I also picked up an autographed card.  This is another on-card auto, something Topps has done quite a lot of lately.  Good for them.  This too is numbered, to the odd number of 353.  That seems like a very strange number to use.  It's also odd that the base cards are rarer than an autographed card, in this case over four times as rare.

The best part about getting the cards was the price.  Two cards from a pack that has a price of
$400 cost me about 4% of that price.  I'll let someone else pay the other 96% on four more cards.

These are the final cards I'll be adding to the player collection this year.  Tomorrow I'll take a look at all the player cards I added in 2013.
Posted by Wrigley Wax at 9:00 AM