I've got 11,950 Cubs cards from 86 different brands listed on a spreadsheet. A random number generator picked five cards, one each from the past several decades. 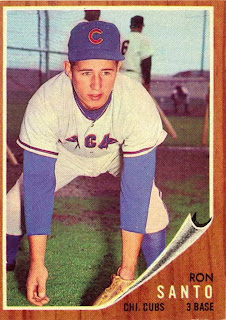 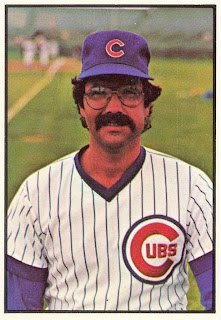 1970s: 1978 SSPC #260 Dennis Lamp  This card comes from the 1978 SSPC book which I've detailed here and here.  The 1978 season saw Lamp in the starting rotation for the entire year.  His final numbers were an interesting mix...his record was 7-15 while his ERA was a respectable 3.29 (best among all Cubs starters).  The Cubs were shut out in six of his losses and scored only one run in six more. 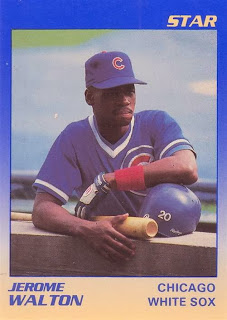 1980s: 1989 Star #10 Jerome Walton  Notice the error on this card, listing Walton as a member of the White Sox.  This card is one of eleven in the Star 1989 Walton set.  It's also one of two in the set that have nothing on the back. I guess that as a rookie, Star ran out of things to say about him after the first nine cards. 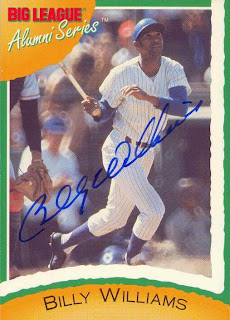 1990s: 1997 Big League Chew Billy Williams  The Big League Chew Alumni Series has three cards in the set, the other two being Juan Marichal and Brooks Robinson.  The cards were available by mailing in proofs of purchases.  Since autographed cards were the only ones they gave, I know that the signature is authentic. 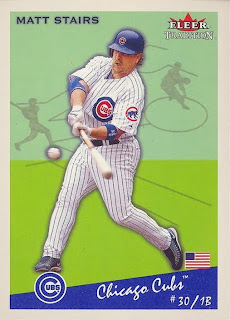 2000s: 2002 Fleer Tradition #290 Matt Stairs  Stairs came to the Cubs for the 2001 season to replace Mark Grace until super-prospect Hee Seop Choi was ready.  His numbers for the season were very average (17 HRs, 61 RBIs, .250) and the Cubs didn't re-sign him for the 2002 season.  Instead, Stairs spent the year with the Brewers.  It was another of a long line of stops in Stairs career...check out this from his baseballreference page

...a pretty long line of uniforms and numbers.
Posted by Wrigley Wax at 9:00 AM