I've added a couple more Billy Williams items to my collection, one from way back and one from this year

Up first is the older item. This is a Topps Stamp from 1969.  It is part of a 240 player set...ten players per team.  There were also team albums that the stamps could be pasted into.  I've been looking for a Cubs album and stamps for a few years, but haven't found one at a reasonable price.  Tired of waiting, I picked up the Billy stamp from three bucks. 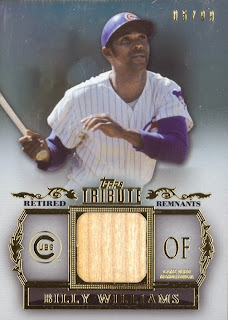 The modern pickup is this 2013 Topps Tribute Retire Remnants card.  The card is /99 and has a nice piece of his bat.  I was the only bidder on this card and got it for the opening bid of $1.99.  Imagine that...a relic card of a hall of fame player, numbered to only 99, for two bucks.

Someone paid $50 for a pack of five cards of Tribute, got this /99 card as the pack hit, and sold it for two bucks.  Ouch.  When I can get a deal like this, I don't miss the excitement of opening a pack at all.  I'll leave that to someone who can risk $50 on a pack and get $2 back for it.

With these two cards, my Billy collection is now up to 230 cards, with 136 in the player collection and the other 94 in the team sets.
Posted by Wrigley Wax at 9:00 AM