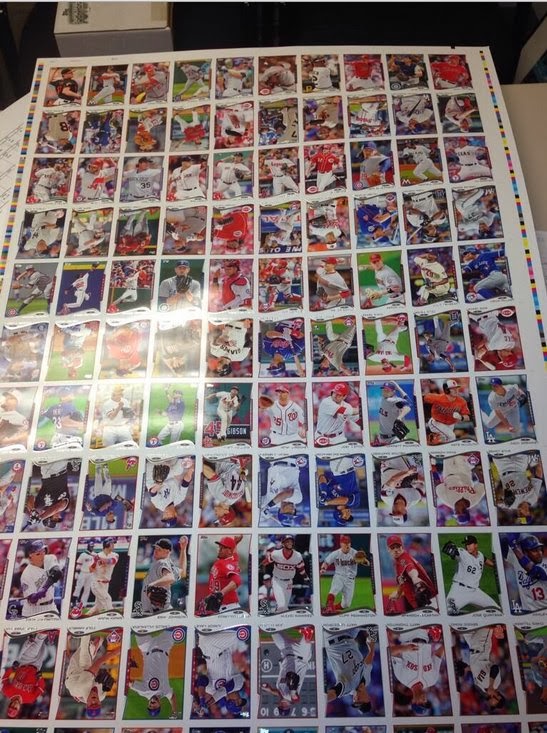 ...of a full sheet of 2014 cards.  The 110 cards on the sheet represent 1/3 of Series One.   I looked over the sheet for Cubs cards and found four.  I don't think that this means there will be twelve Cubs in the series.  My experience with full sheets is that the teams aren't spread evenly across the sheets.  I've got a full sheet from the 1989 set that doesn't have a single Cub among the 110 cards.

Back to the four Cubs that I did find.  The pictures aren't super sharp since all I had to work with was the Twitter picture.

Jeff Samardzija's card looks like this....and hopefully the Shark will still be with the Cubs by opening day

They've got two Cubs right next to each other, Junior Lake and Carlos Villanueva.   It looks like Villanueva has his Rollie Fingers mustache.

Cubs card number four was on the far left of the picture and it's hard to make out exactly who it is...but I've got an educated guess.

I can't make out the name of the player because of the angle of the picture.  He's obviously an infielder and a white guy.  It looks like it's a second baseman turning a double play.  Is it my guy Darwin Barney?

What do you think?
Posted by Wrigley Wax at 9:00 AM