The three other mini relics arrived yesterday.  Each came from a different seller, and each arrived quickly. 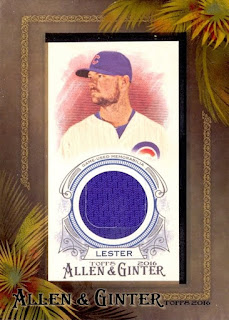 Jon Lester has a card in both the full sized and mini relic sets, but not the base set.  Odd. 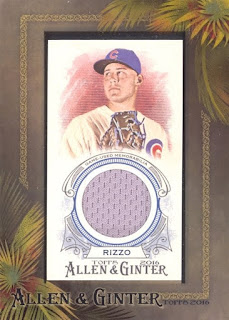 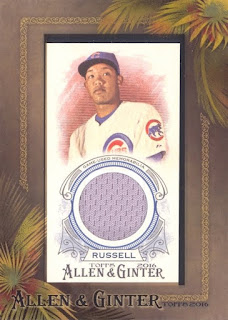 It seems like Ginter is becoming the "Don't look straight at the camera" set.  I may have to look into that a bit further when the full set arrives.

With all four of the 2016 mini relics, I now have all 43 of the Cubs relics from the start of Allen & Ginter in 2006.  Some of the players are duplicated in a particular year because there was both a jersey and bat version.  I do limit myself to just one jersey version, though.  I pass if there is both a home and away version.

Take a look a the tile.  You'll notice how things got nuts in 2010 and 2011, with 13 and 10 relics from those two years.  That's more than half the entire collection from two years.