Today's post is a bit more personal and a lot less baseball, but I'll connect it to the Cubs at the end.

Is anyone familiar with drum and bugle corps?

Youth drum and bugle corps have been around since the 1930's.  Many were sponsored by churches or VFW halls.  Corps would perform in parades and in competitions with other corps.  Today's modern corps are under the organizational umbrella of Drum Corps International, DCI.

Corps consist of up to 150 members.  Tryouts are held in the late fall and then over the winter the corps will have a weekend practice once a month or so.  In late May the entire corp comes together and begins practicing seven days a week, 12 or so hours each day.  After three to four weeks, they take to the road on tour, performing at three to five shows a week.

A typical day on tour would have practice all morning and afternoon, outside in the hot sun.  Drum corp kids usually end up with a pretty dark tan.  After that is is on to a show in the evening, and then a bus ride overnight to the next stop.  Corps typically stay in area high schools, practicing on the football field and sleeping on the gym floor.

It sounds like a crazy way to spend a summer, but the kids in the activity love it.

He started out as a 16-year-old after his sophomore year of high school and spent six years as a corp member.  His last four years were with the Bluecoats, a corps based in Canton, Ohio.  He was a percussionist, playing the timpani. 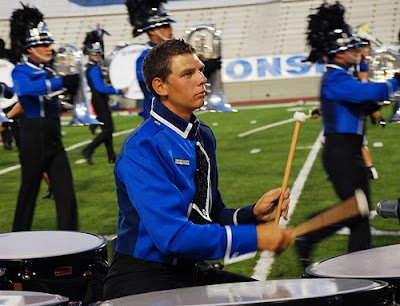 After he aged-out (you can't be over 22), he became a staff member.  He spent three years with a group in Atlanta (which is where he lives), and the past three years he has been on the staff of the Bluecoats.

This past weekend, DCI held their championship event.  The DCI World Championship is the drum corp equivalent of the World Series.  Its a big deal.  The event is held at Lucas Oil Stadium in Indianapolis, the home of the Colts.  During his marching years we went to championships in Denver (Invesco Field), Madison (Camp Randall Stadium), the Rose Bowl, Bloomington, Indiana (Memorial Stadium), and Lucas Oil. The one final of his we missed was at Gillette Stadium, the home of the Patriots.  They use big stadiums and get big crowds. 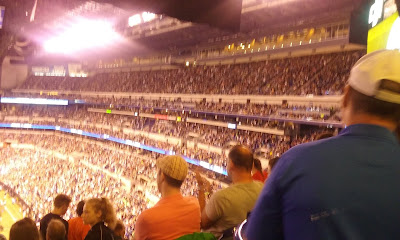 Here's a look at the crowd.  Typically they just use the seats on one sideline.

The Bluecoats have been around since the early 1970s.  During #2's time with them they were good but not great.  Their best finish was 4th in 2006, which was their highest place ever at that point.

They past few years they've been improving and are getting to a more elite status.  Two years ago they were second and last year they finished in third place.  They were on the rise.

As you might have guessed from the post title, this year they reached the mountaintop!  For the first time in corps history, the Bluecoats are the champs!  Their long drought is over. 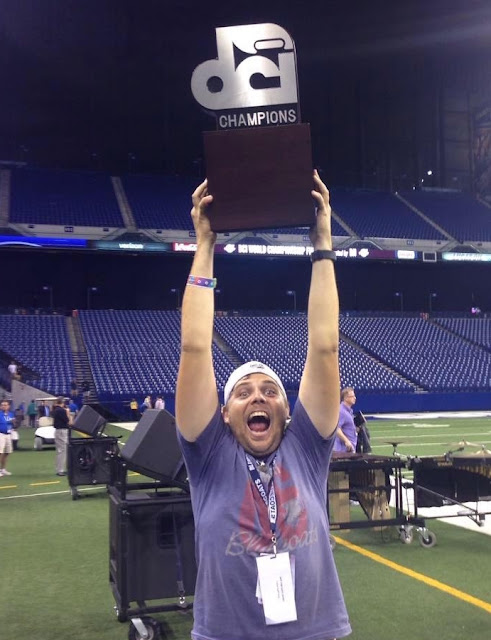 #2 was thrilled and so were his mom and dad!

It is possible to win a championship after going without for a long time.

You know were this is going now, don't you.

If your wondering what a show looks like, here is a link to a Youtube video taken at their 2016 show at the Georgia Dome.  Also, if you hear what sounds like they are being booed by the crowd, they're not booing, they are Blooooooing,