That Was A Failed Experiment

Theo has been pretty good at picking up pitchers off the scrap heap and turning them into an asset.  Jake Arrieta would be the best example.

Brian Matusz would be the worst.

The Cubs picked him up in early June after he was released by the Braves, who had just picked him up a few days early from the Orioles.  Three organizations in a matter of days is not a good sign.

After making a few starts in Iowa, the Cubs brought him up to make a start on Sunday.  The idea was to occasionally add a sixth starter to the rotation, giving the five main guys an extra day off.

It's a nice idea, but Matusz clearly isn't the right guy.  He gave up six runs in three innings.  The next day the Cubs designated him for assignment.  The Brian Matusz era is over.

Spending one day with the team means that we won't ever see a card that shows him as a Cub.  What a tragedy, that his glorious 18.00 ERA won't be immortalized on cardboard. 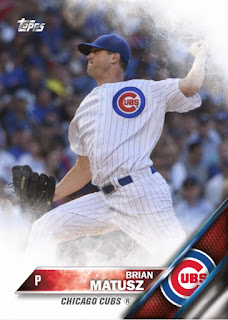 Consider it cyber-immortalized.
Posted by Wrigley Wax at 7:00 AM