Back in 2008 idiot Joe Morgan was doing a Cubs game on ESPN.  He spouted off about the basket at the top of the bleacher wall.  He went on about how it was put there in the late 60s to give Ernie Banks a chance at more home runs.  Morgan even had a name for it, Banks Boulevard.

There isn't even the slightest sliver of truth to what he said.  There was a lot of outrage among Cubs fans back then.  No Cub fan, including me, had ever heard of the phrase "Banks Boulevard."

Yet last week as I was perusing a Cardinals fan forum (I like to see what the other side says about the Cubs), there was some discussion about Banks Boulevard.  Eight years later, Morgan's BS is still alive and kicking.

With the help of the Tribune archives, allow me to kill the BS and set the record straight. 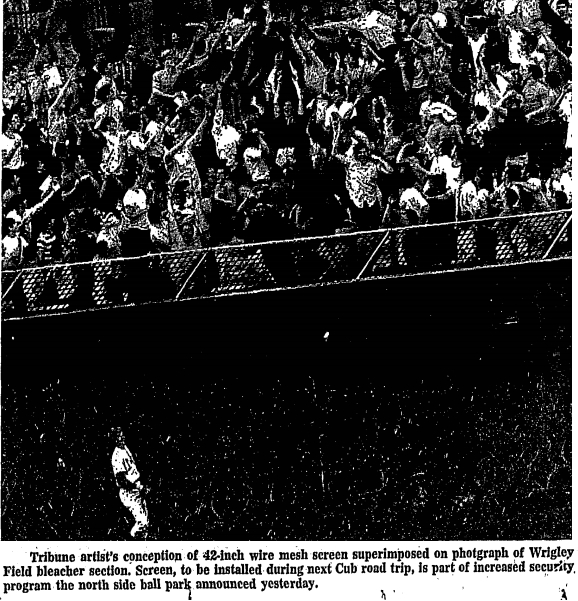 This picture from April 17, 1970 lays out the Cubs original plan.  The bleacher bums were getting too rowdy and so the screen would be installed to keep them and the trash they tossed off of the field.  The plan was for the screen to be installed at the top of the bleacher wall which meant that fans in the first couple rows would have to watch the game through the screen. 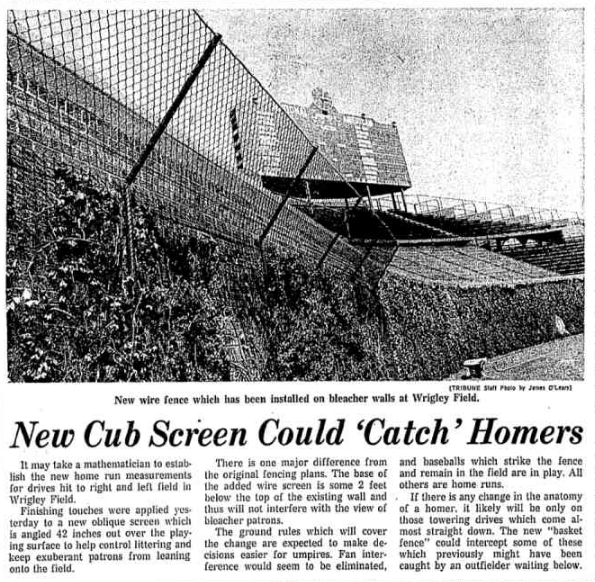 Now on to Ernie Banks.

The Cubs first game at Wrigley with the basket was on May 7, 1970.  At that point in his career Ernie had 498 home runs.  He would go on to hit eight more home runs at Wrigley Field.  And how many of those ended up in the basket, or Banks Boulevard as the idiot called it? 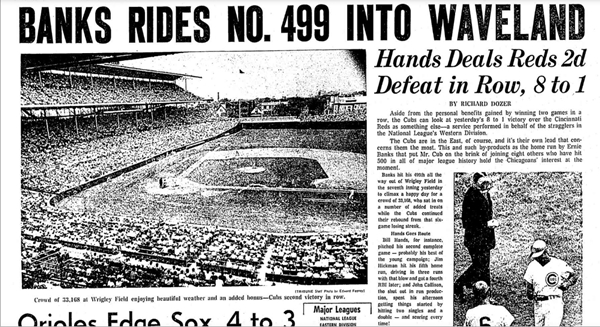 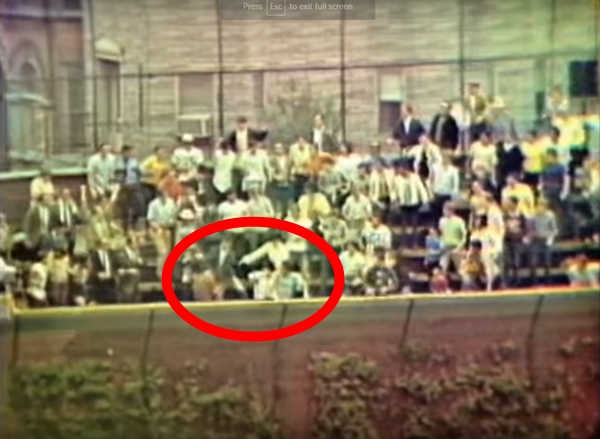 This picture come from the WGN clip of #500 on May 12.  The ball landed about three rows up in the bleachers and then bounced back onto the field. 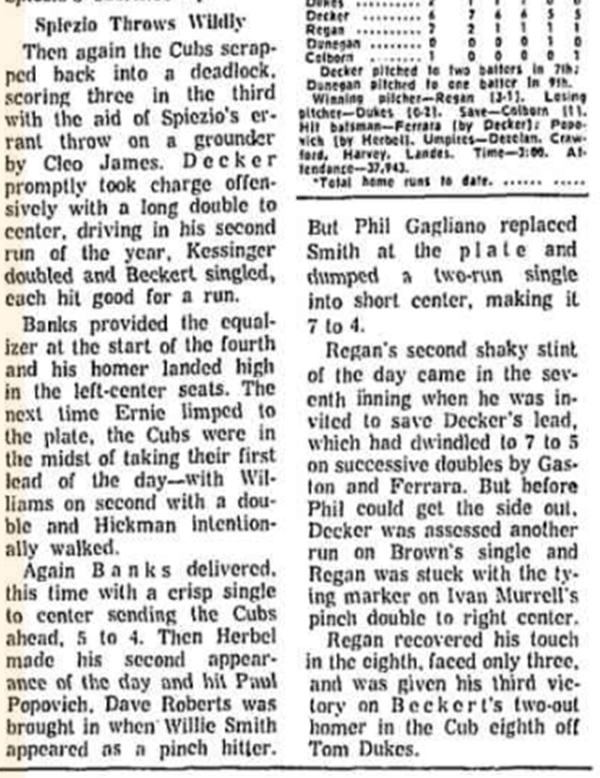 Ernie's 501st career homer was hit on May 30th and the Trib article states that the ball landed high in the left-center seats.  No basket shot there. 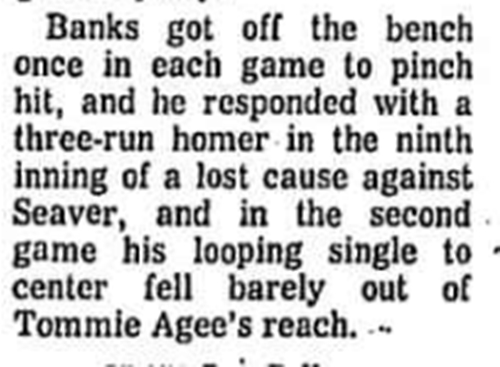 On June 24th he hit #505 as a pinch hitter in the ninth inning. The article makes no mention of where the ball landed.  Could it have been a basket shot?  Maybe, but I'd think if it landed in the basket the article would have mentioned that fact.

This picture shows where #508 landed on September 5.  It hit high up on the left field catwalk.  There wasn't even a basket along the catwalk back then.  The initial 1970 installation placed the basket only in places where fans sat.  There was no basket in front of the catwalks and in center field. 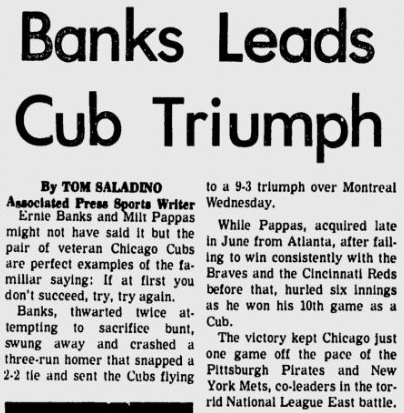 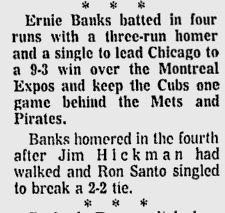 There was no Tribune sports page in the archives for his next Wrigley homer on September 10.  I had to resort to other newspaper accounts of that game.  His homer in the fourth inning is mentioned in each article but no location of the ball is given.  Again, no mention of a basket to me means that it didn't land there.  This was his last Wrigley homer in 1970.

Here's a look at his first 1971 Wrigley blast.  The article and picture show it just making the bleachers. 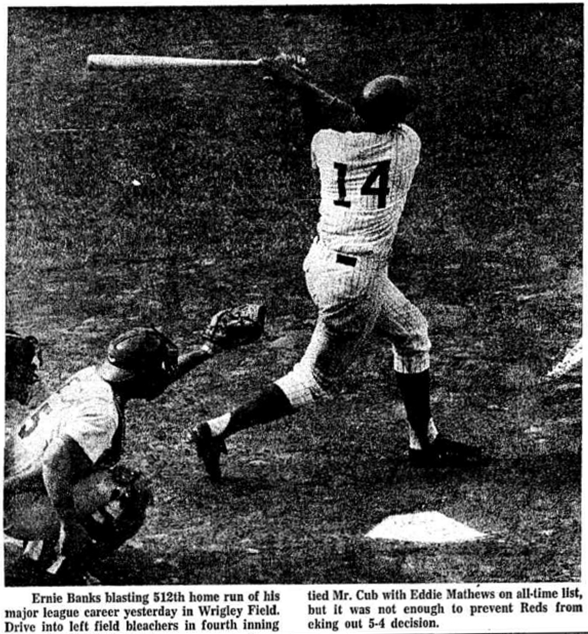 And this is the swing for his 512th and final home run.  The caption says the drive went into the left field bleachers.

Even the two were basket shots, that means 2 out of 290 career Wrigley blasts were in the basket.

Not a chance, Joe Morgan.