All The Baseball Enquirer "Cubs" 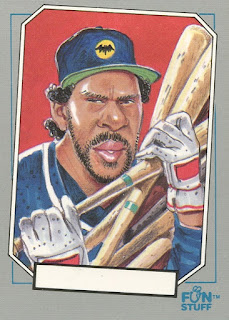 In December I showed this card that came from reader Chad.  It's from the 1992 Baseball Enquirer set.  The set is an unlicensed parody set and no team names are mentioned.  On the back, Dawson was razzed for a bat-throwing incident.  That is the reason for the bat logo on his hat.

The set includes two other cards that have been designated as Cubs cards by various sources.  Sportlots had each for 18¢, 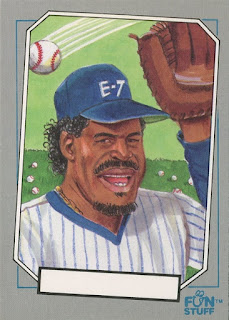 George Bell was with the Cubs for just one season before being sent south of Madison Street.  The card slams him for his lousy fielding skills.  That E-7 hat is pretty harsh.  Five times during his career he led his league left fielders in errors (four times in the AL and during his once NL season) and he had the second-most left fielder errors once.  I guess that it pretty bad! 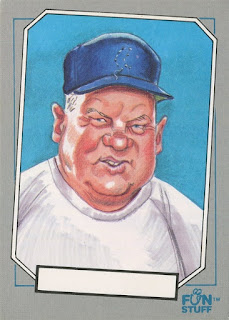 WIth Zimmer they lampooned his size.  The card talks about expansion, not league expansion but his gut's expansion.  Ouch!
Posted by Wrigley Wax at 7:00 AM