I went to a show on Saturday, my first time in over 30 years.

I didn't have very high expectations.  The show would be small, about 30 dealers.  The weather was lousy, with heavy rain predicted for the entire day.

The rain came.  Some of the dealers didn't.  About a quarter of the tables were empty.  I got there around 10:00 a.m., right when the show was opening.  I planned to take a picture to post here, but decided not to.  There were so few people in the room that I thought it would seem odd for me to get out my phone and snap a picture.

I don't want to stereotype, but there were at least three dealers that looked... 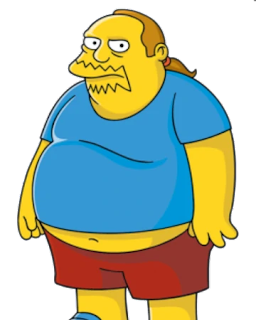 .... like this.  One of these guys was sitting on a chair in front of his table, thumbing through boxes of his cards.  I couldn't get near his stuff (nor did I really want to).

Many of the tables were filled with modern stuff.  There was lots of football and basketball.  It surprised me.  I assumed that baseball would be the main sport, but it wasn't.

A few guys had some older Topps baseball.  Nice, but I've got all the Cubs.

I did chat with a bit with one dealer who had all vintage  He asked what I was looking for and I told him Cubs.  He got very excited and pointed to some older Topps cards of Ernie Banks, including his rookie card.  I had to tell him I already had those cards, that I have the entire run of Topps Cubs.  Instead of dismissing me, he pointed to some other old stuff.  I found Bowman card and I actually made a purchase. 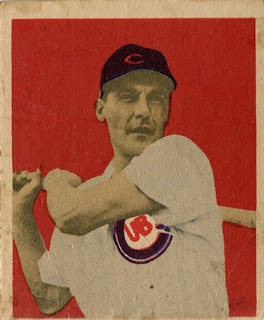 This is the 1949 Bowman card of Phil Cavarretta.  All of the '49 Boman that I have are reprints.  I think I may take a slow and steady trek towards replacing the reprints with the real cards.  So there is a nice positive to come from the show.

Otherwise, I think I'm done.  My problem with card shows isn't necessarily the show, but its how narrow my collection is.  I don't need any of the modern stuff -- I have them already.  I don't need the vintage Topps, I've got all of them too.  The cards I'm looking for, my white whales, are too oddball-ish to be seen at a small show.  If they aren't anywhere online, the chances I'll see them at a show are pretty slim.

The only time I think I'd go again would be when the National returns to Chicago.  The sheer volume of dealers and their cards gives me a little hope.  But otherwise, I'm done.
Posted by Wrigley Wax at 7:00 AM