Here's another card that came to me via reader Chad. 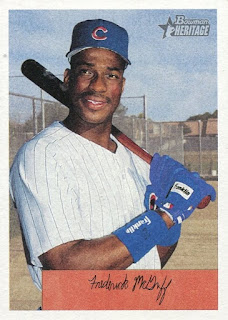 It's the 2002 Bowman Heritage card for Fred McGriff.

One of the first sets I completed when I returned to collecting was the Heritage set.  I loved the vintage / modern combo.  So did lots of other collectors.  So did Topps.

About the same time Chad's card arrived, I saw that Topps was reviving Bowman Heritage with a 2019 set.  I found a listing for the Cubs team set.  The BIN button was clicked (the set should be arriving soon) and I then started looking for checklists for the earlier Bowman Heritage sets. Let the quest begin!

The checklists and the cards were fairly easy to find.  I spent some more Christmas money and should have the 2001 - 2007 Bowman Heritage cards soon, too.

There are 107 Cubs Bowman Heritage cards altogether.  Stay tuned for them!
Posted by Wrigley Wax at 7:00 AM