At The Friendly Confines!

Everything about yesterday was great except for the score of the game.
The weather was fantastic, especially for early April.  I've been to April games with snow falling, bundled up like an Eskimo.  Not yesterday, though.  I was in a short sleeve shirt.  It was wonderful!
Getting to the game was easy, too. Mrs. WW and I had our bicycles with us for a trip we’re taking the rest of the week.  We parked our car at Lincoln Park Zoo and the rode the bikes along the lakefront to Waveland Ave. and the west on Waveland to the ballpark.  We used the Cubs free bike check, and our bikes were safe and secure. 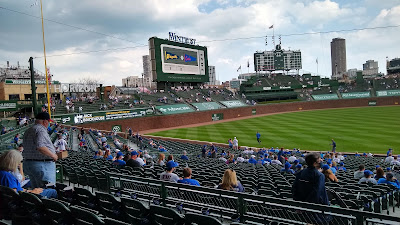 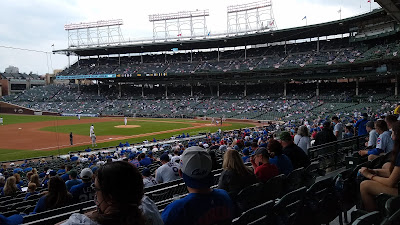 Entry into the park was simple, as we just had to put my phone under a scanner.  The Cubs also have a new metal detector system that didn’t require us to empty our pockets.  Once in, we made our way to our seats.
Fans were spread out in the seating area.  There were two empty seats on either  side of us.  No one was sitting in front of us and the row behind us was completely empty.
We knew that wearing a mask the entire game would not be easy.  Shame on us, but we had a work around.  We brought in a large bag of peanuts and slowly ate them throughout the game.
I wish the game turned out better.  The Cubs didn’t get their first hit until the seventh inning and didn’t get a run until the eighth inning.
The 11,000 fans were loud and enthusiastic.  Lack of numbers didn’t mean lack up support.We all were just glad to be inside of Wrigley Field..
Posted by Wrigley Wax at 7:00 AM