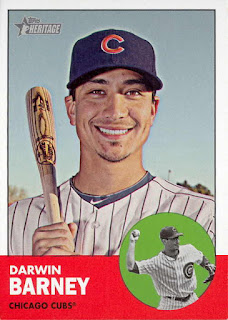 Heritage 2012 included this SSP error card of Darwin Barney.  His position is missing, which mimics the same mistake made on the 1963 card of Cubs second baseman Ken Hubbs.

I've been tracking eBay listings and sales of the card for over ten years now.  I was curious as to just how rare the card is.  I tracked 38 listings within the first two years after its release. In the past eight years, just ten more listings of the card have shown up on eBay.

A listing appeared in mid June, the first since July of 2021.  It was a BIN listing and the card sold pretty quickly.  The sale price was $99. That is right in line with the average price of the sales that I've tracked, $97.91.