A Hall of Fame Jersey

I've been on the lookout for autographs and/or relic cards of Cubs greats from the past and I was pleased to pick up this one for a mere six bucks. 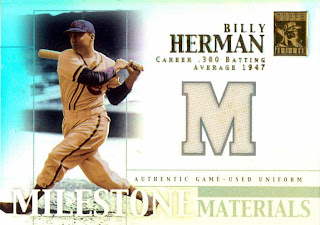 It a really nice looking jersey card of Billy Herman from Topps' 2002 Milestone Materials insert from the Tribute set.  Like I said earlier, it was only six bucks and it's a Hall of Famer.

Herman was another Cub great that I knew very little about.  But as I got back into collecting and started getting oddball sets, I became more aware of him and his accomplishments.

If I had to put him in more modern terms, I would say he was a Ryne Sandberg without the power.  He was a ten-time all star and was great with his glove.  He also hit for average, with a lifetime average of .304.  He spent 11 of his 15 big league years with the Cubs, breaking in during the 1931 season.  During his time in Chicago, the Cubs won the pennant three times and his steady glove and bat were a part of the reason why.

In addition to this card, I've got 24 other cards of Billy Herman.  He was included in mainstream sets like Legendary Cuts along with oddballs like Cubs All-Time Greats.  And for a guy that played so long ago, very few of the cards have pictures that were reused.  18 of the 24 are unique pictures.