I picked up this card, anticipating that I'd be needing it for my autograph collection.  The rule I use is that I'd like a certified autograph of a Cub player if one was made during a season he played with the Cubs. 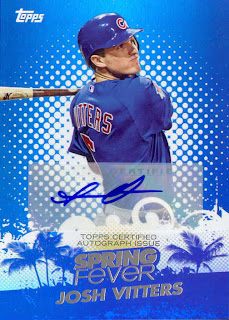 ...2013 Spring Fever autograph of Josh Vitters.  Vitters spent the last month and a half of the 2012 season with the Cubs, but he was not good at all.  With regular third baseman Ian Stewart  injured and out for the year, the Cubs had nothing to lose by playing Vitter at third and seeing if he was ready for the bigs.  His .121 average in 99 at bats would indicate that, no, he isn't ready.

But there is a chance that he will play with the Cubs sometime during the 2013 season, so I went ahead and bought the card.  If we see him at Wrigley this year, then I'm covered.  If not, then I wasted a few bucks.
Posted by Wrigley Wax at 9:00 AM