It's been a long time since I've done a "One and Done" post, set let me re-explain the concept: I put together a list of all the players that have only one Topps card of them with the Cubs (excluding multi-player rookie cards). 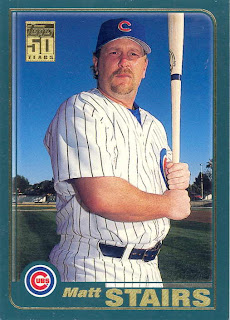 Today's card is of Matt Stairs from 2001.  The Cubs were in the market of a first baseman after deciding to not try to resign Mark Grace.  The brass thought he would be too expensive for his age, though the Diamondbacks disagreed, signed Grace, and won a World Series title.

The heir apparent at first was Hee-Seop Choi, 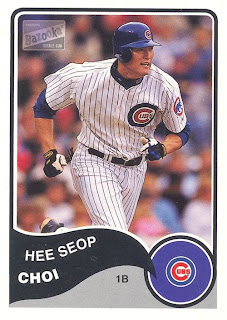 but he wasn't ready for the big leagues yet.  The Cubs didn't want to commit to a long term contract, so they went the cheap route.  Veteran Matt Stairs was brought in via a trade with the A's.  He cost the Cubs minor league pitcher Eric Ireland (who???).  Like I said, the Cubs were going the cheap route.

Stairs was 33 at the time and most figured his best years were behind him, though over the previous four season he averaged 28 homers per year.   Ron Coomer was also brought in... 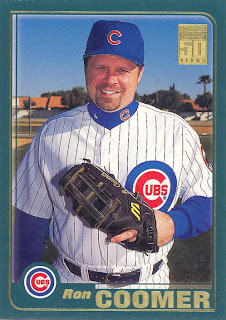 ...to tag-team at first with Stairs.  The Cubs thought that Stairs + Coomer = Grace.

So how did it go?  Well, Stairs played in 128 games, 89 of them at first base.  He hit .250 with 17 homers, but that wasn't enough.  The Cubs had a surprisingly good season, winning 23 more games than in 2000.  When the team was still in contention in July, they scrapped the Stairs/Coomer platoon and traded for Fred McGriff.

After the season, the Cubs had no interest in signing Stairs--McGriff would be the first baseman until Choi was ready.  Many figured that Matt Stairs might be finished, but he hung on for another ten seasons (and nine more teams!).

Check out this shot of his baseball-reference page to see all the different uniforms he wore: