I picked this card up for my Andre Dawson player collection... 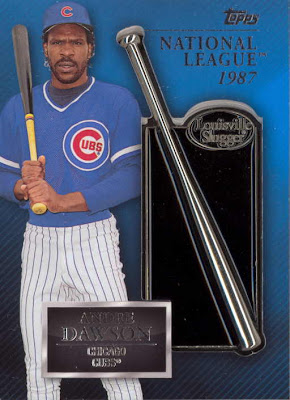 ...from Topps 2013 Silver Slugger insert set.  This is one of three award inserts (Cy Young and MVPs are the others) that replaced the rings inserts from last year.

The Silver Slugger checklist has 25 different SS winners.  One odd omission is Ryne Sandberg, who won the award seven times, more than any other second baseman in MLB history.  Ryno didn't make the MVP checklist, either.

The most striking thing for me with the card is how thick it is.  It's 1/4" thick, which is as thick as a stack of 14 regular cards.  I suppose it needed to be that thick for the silver bat to fit inside.  Luckily for me, I don't keep my player collection in a binder...I don't think I could find a page with pockets thick enough for this one.
Posted by Wrigley Wax at 9:00 AM