The Mayor of Wrigley Field

Who is the Mayor of Wrigley Field?

Nope, not Harry Caray; he was the Mayor of Rush Street

The Mayor of Wrigley Field is this guy, 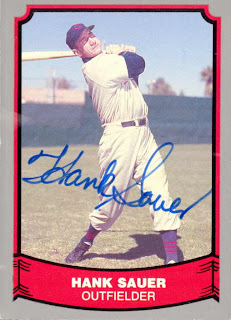 Hank Sauer, the latest addition to my autograph collection.  His signature is on a 1988 Pacific Legends of Baseball card.

So class, raise you hand if you know who Hank Sauer is...and I see that not too many hands are going up.

I've got to admit, that for a guy known as The Mayor of Wrigley Field, I didn't know much about him either.

Growing up in a house full of Sox fans didn't give me much of a chance to hear about Cubs players from earlier times.  The only knowledge  I had of Sauer was from this card I got in 1975... 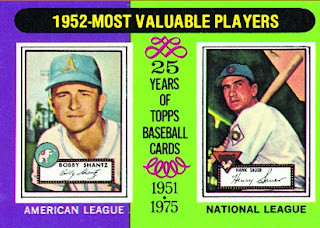 ....and it shocked me that a Cub other than Ernie Banks had won the MVP award.  In my world, Cubs history began with Ernie Banks.  I had never heard of Hank Sauer or the fact that he was the NL's MVP in 1952.  But in those pre-internet days, I couldn't just google up a bunch of information on him.

I didn't actually learn much more about him until I got back into collecting in 2008.  One of my early goals was to get all the Cubs team sets back to 1961 (the year I was born) and then one card from each of the prior years.  I decided to get as many Hank Sauer cards as I could since he was the best player on the team before Ernie arrived. ( I later decided to go ahead and get the complete team sets back to 1951). 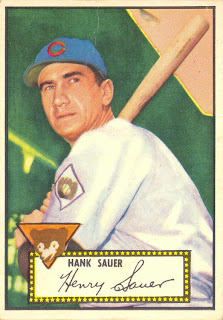 I got this card first, since I knew of it from the '75 MVP card.  In his MVP season, he hit a league-leading 37 home runs and knocked in a league-leading 121 runs.  He became the first player to win the MVP on a second division team (the Cubs finished fifth that year).  That was his third straight season of 30+ homers and he would top that again in 1954.

Sauer was a tobacco chewer, and the fans in the bleachers would toss packages of chew his way whenever he hit a home run.  It was that type of popularity with the fans that earned him the nickname "The Mayor of Wrigley Field."

He only spent 7 seasons with the Cubs and the teams were generally pretty bad, so that may explain his lack of recognition.  But for a time, he was the face of the Cubs and his is a signature that deserves a place in my collection.

If you want to read more about Hank Sauer, there are a couple of nice articles here and here.
Posted by Wrigley Wax at 9:00 AM