For the first time since 2003, Ryan Dempster is not in Mesa with the Cubs. His first spring with the team was 2004 and he was a reclamation project. He had been signed as a free agent over the winter, coming off of Tommy John surgery performed in August, 2003. Because of the surgery, the Cubs plan was to make a reliever out of Dempster, figuring that he wouldn't be able to throw the innings necessary to be a starter.

He did make his way back to the Cubs late in the 2004 season and picked up his first career save. He became the Cubs closer in 2005 and posted 87 saves through 2007. In 2008 he returned to the starting rotation and came up with 58 wins through last summer. In his walk year, the Cubs traded him to the Rangers at the trade deadline.

The autographed card I got of Dempster is... 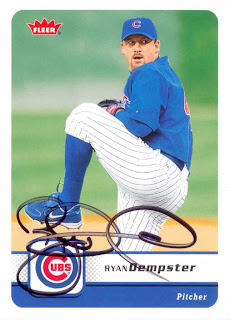 ...this Fleer card from 2006. It's odd that someone who was with the Cubs for so long and was fairly successful never had a certified autograph card during his time in Chicago. There were plenty of relics (I've got five of them) but no autographs.

I searched through my collection and found 67 different Dempster cards. Several had duplicate fronts, so I took them out and ended up with 62 cards spanning the nine seasons Dempster was with the Cubs. The cards are in chronological order, starting with his 2004 Topps card and ending with a 2012 mini.