My Next Heritage Card

While I'm still waiting for my Heritage package to arrive, I've got another that I had to pick up elsewhere. 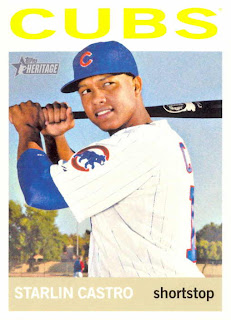 This is the color variation card of Starlin Castro.  These variation cards are just a flat out gimmick by Topps--nothing at all like this existed in the 1964 set.

My order with Brentandbecca included this card..  But as he started ripping, Brent realized that the card was a harder pull than he originally thought.  He quoted me a price of $15 when I ordered but then said he may have to charge me another $15 if he could even pull one.  That made me a little nervous, so I started checking ebay auctions for the card.

Most were at or near Brent's price.  Then one showed up as a BIN for $10.  I pounced.  Then I told Brent thanks, but no thanks on the Castro card for me.  As it turned out, he pulled 21 of the 25 different color variation cards, plus 27 extras in his 36 cases.  But of the 48 total cards, not one was of Starlin Castro.  He had three customers that he had sold the card to.  One he was able to get via trading with another casebreaker, and the other two customers (including me) got a refund.

He was surprised as the low price I paid for my card, and was glad that getting a refund wouldn't bother me.

I also told him I was used to opening packs and not getting Cubs....they always seemed to be the toughest pull for me.  Senators, Expos, Phillies I would get by the handful. But Cubs, not so much.
Posted by Wrigley Wax at 9:00 AM