My main card supplier, Brentandbecca, has finished opening his 36 cases of Heritage.  If I did my math right (9 cards x 24 packs x 12 boxes x 36 cases), that gives him 93,312 cards to sort through.  It's going to be a little while before my Cubs team set arrives.

There are a couple cards that I have to get on my own, though.  Here's one: 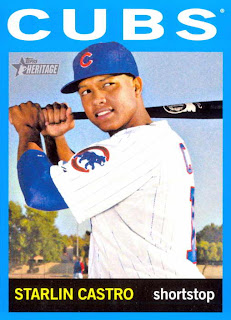 It's the blue Walmart version of Starlin Castro's card.  The base Castro card is a high number short print, so I'm assuming the Walmart version is a tougher pull, too.  I had to fork over three bucks for the card, but that's a whole lot easier than buying a bunch of packs at Walmart and hoping to get the Castro card, which I'm sure I wouldn't!

Since this is my first 2013 Heritage card in hand, it's given me the opportunity to feel the difference in cardboard.  You can tell right away that it is a thinner stock than what has been used for Heritage in the past.  I've read alot of complaints about that, but you won't get that from me.  I actually like the skinnier cardboard.

I don't think I've ever written about it, but one thing that's bothered me about all the releases of Heritage is the thicker cardboard.  To me, it always seemed too thick.  I've got Topps cards going back to the beginning, and none of them ever felt as thick and stiff as the Heritage cards.

I put an original '64 card in one hand and the Castro card in the other, and they feel pretty close.  When I picked up a 2012 Heritage card, it felt too heavy and thick.  So to me, Topps is actually getting closer to the original.

Now that they're getting closer with the cardboard.... 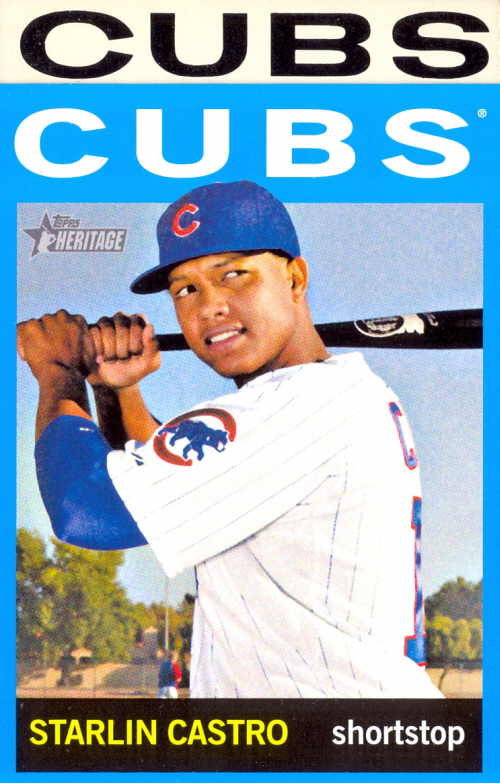 ....its time to start matching the fonts!  That's a '64 card behind the Castro card, and you can see that the Heritage font is close, but not an exact match.  The original is thinner and more stretched out.

I guess I can't expect everything to match!
Posted by Wrigley Wax at 9:00 AM