About a month ago I posted about a 1963 Salada Tea Coin of Billy Williams that I recently added to the player collection.  The 1963 set was actually the second one put out by Salada; they put out their first set the year before.

The 1962 set was quite different from the '63 version.  The '62 coins were plastic, not metal.  The picture on the front was a paper sticker.  The set was also much bigger, with 221 players included, compared to the '63 set with only 63 players.

The coins come in six different color, depending on the player's team.  All of the Cubs coins are red.  The original checklist was only 180 coins--ten per team.  But with the addition of the Mets and Colt '45s, twenty players from those teams, plus an additional 21 players from other teams were added to later runs.

Billy Williams was one of the extra 21 players added.  He was the 1961 NL Rookie of the Year, making him an up-and-coming player.  Left out of the original ten Cubs, adding him later makes sense.  Salada also added two other Cubs to the set, Bob Will and Jim McKnight.  That made no sense! 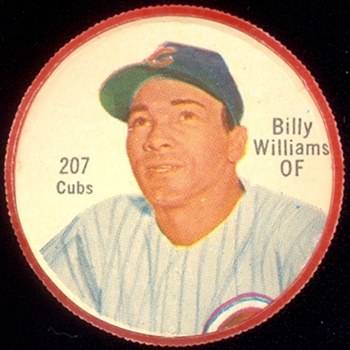 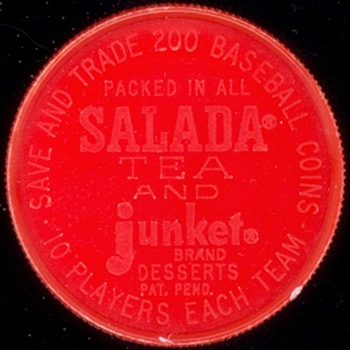 Two things that I find interesting...

...first, look at the Cubs logo on Billy's uniform.  It looks like they thought the circle around the logo should be red, not blue.  At first, I assumed some kid drew with a red marker on my coin.  But I checked and all the Billy's have that red circle over the blue one. 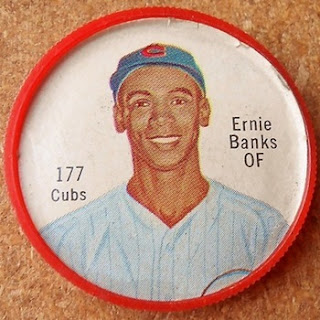 They did the same thing on Ernie's coin too (a picture borrowed from Ebay).  I guess the good folks at Salada thought the Cubs circle should be red, not blue.

Art and math are not Salada's strenghts....I hope their tea tastes good.