I found a five card Cubs lot of these for a whopping 50¢, not really knowing what they were.  Once I got the cards in hand, I did a little more research and found that there were seven more in the Cubs team set.  I was able to pick up all seven from a single seller at Sportlots to finish off the set. 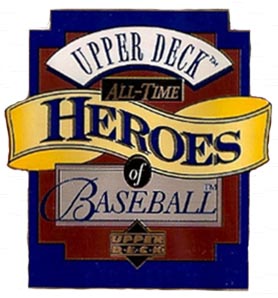 So what are these?  They're from a 1993 Upper Deck product called All Time Heroes of Baseball.  The design mimics the trifold T202 set put out by Hassan cigarettes in 1912.  The cards measure 2 1/4" x 5 1/4".  I wasn't sure how I was going to store such an odd sized card, but BCW had six-pocket sheets that should fit the cards nicely.

The front includes a portrait shot of the player, an action shot, and the BAT logo (more on that in a bit).  There is no team designation on the card anywhere, and some of the players are shown wearing the uniforms of two different teams.  I put any player with a Cub uniform in the Cubs set.

The BAT logo is from an organization known as The Baseball Assistance Team.  Their mission is to assist anyone in the baseball family (not just players) that have a financial need.  The cards  say "Through its Heroes of Baseball program, Upper Deck Company supports the BAT and its worthy cause."  I wonder how much Upper Deck actually donated to BAT?

Though titled All Time Baseball Heroes, the checklist is missing a couple really big Cubs names, Banks and Williams.  A few lesser known '69 Cubs were included though, Beckert, Kessinger, and Holtzman (though mainly written up as an A).  Santo and Jenkins made the list, as did the HOF trio of Tinker, Evers, and Chance.  Billy Buck was included, though he had just retired just a few years earlier.

The oddest inclusion was of pitcher Moe Drabowsky.  His is not a name that comes to mind when discussing all time heroes of baseball.  But then, Toby Harrah, Joe Sambito, and Cliff Johnson are in the set, too, so using the title All Time Heroes of Baseball  is done very loosely!