I thought it would take me a while to get my media guide this year.  Very few have been listed on Ebay, and the ones that were listed were being sold for about $40 each.  That's way more than I'm willing to pay.

I figured that I would try to find one at one of the souvenir stands when I was at the Cubs game last Saturday.  I thought that there would be some available somewhere in the park.  Well, it turned out to be a simple hunt.  While buying my scorecard at the booth just inside the gate, I saw on the booth's sign that in addition to scorecards, I could buy a media guide!  In one simple purchase I had both my 2013 scorecard and media guide.  The ballpark price was less than half of the Ebay price, with no shipping either  (unless you factor in the gas for a round trip of 300 miles!).

Here's the cover to the guide... 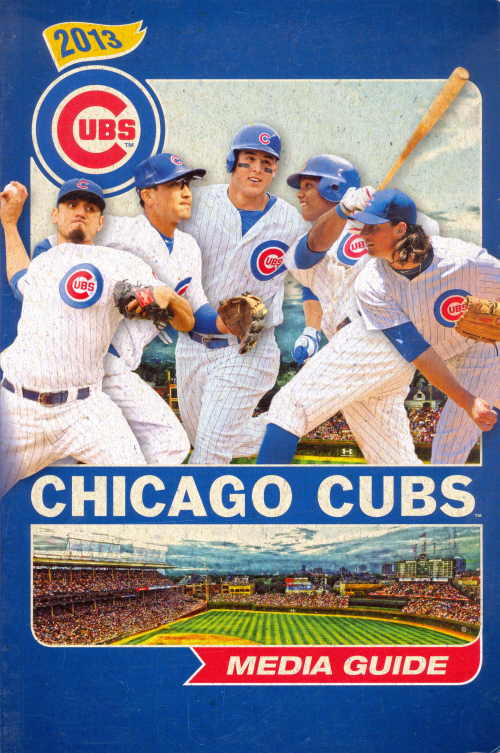 ...and you see it follows the same template as the scorecard cover, with design elements from Topps '73 and '74.  The players featured on the Cubs Convention season schedule are the same ones on the media guide.  Again, Alfonso Soriano is missing....the Cubs still hoped to find a taker for his megacontract.

The format of the guide is unchanged from the past several.  There's not much new inside.  But if you wanted to know how Hunter Cervenka did last season in Peoria, I can tell you!

This guide continues my run of media guides produced by the Cubs, starting with their first roster book in 1957.  The name of the book shifted to media guide in 1982, the first book produced by Tribune Company ownership.

Here's my shelf of books....you'll also notice that they started getting thicker when the Tribune Company took over, too.