Yesterday I attended my second Cubs game of the season, watching the Cubs fall to the Giants 3-2. A week and a half ago I caught the second game of the season in Pittsburgh, a game the Cubs lost 3-0. I've come to the conclusion that April is not a good month to go to a game.

Let me tell you!

First off, the weather stinks. The game time temperature at the Pittsburgh game was 35°. Yesterday saw warmer temperatures at Wrigley...by a lousy 3°, a 38° game time temp. With both games we saw snow falling while driving to the game. It was great Bear weather, but lousy for the Cubs.

April also is a bad month because the Cubs bats take the long road north from Mesa and don't arrive until May. I saw them get shut out on two hits in Pittsburgh and score only two runs at Wrigley, both coming on a homer by Dioner Navarro.

Apparently the Cubs lose a lot of games during the month of April so that makes it bad. Of course the same can be said for most other months during the season.
So why did I go? Two good reasons.

First, we went to Pittsburgh because that was Mrs. WW's idea...actually she wanted to see Fallingwater, but since the Cubs were in town too, it seemed like a good idea....until the weather got cold.

After freezing in Pittsburgh, why on earth did I repeat my folly ten days later? 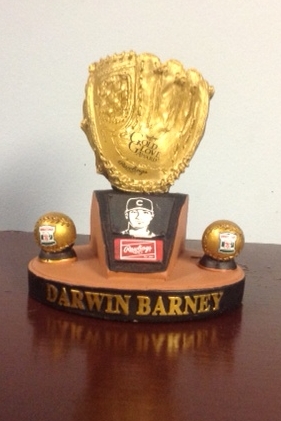 ....a Darwin Barney Rawlings Gold Glove Award Replica! How can I call myself a Darwin Barney collector if I didn't go and get this. The Cubs gave these away to the first 10,000 through the gate. Wanting to make sure that we would get one (three actually...me, Mrs. WW, and WW Jr. all went), we got to the game by 11:00 a.m.--an hour before the game started. We got ours, but that also meant having an hour to kill in the cold. But hey, call me dedicated.

It's a replica trophy, and to give you an idea of it's actual size, here it is along side... 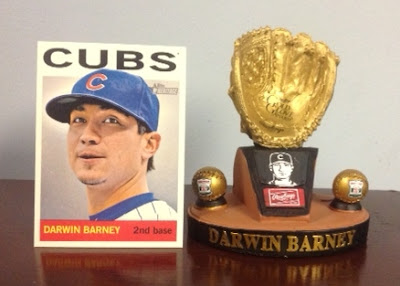 ...a baseball card. It's not quite four inches tall. It also came in a nifty box... 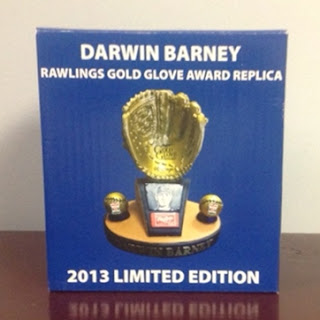 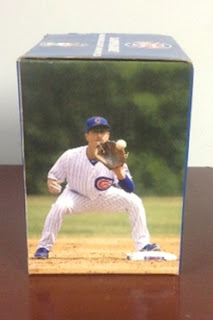 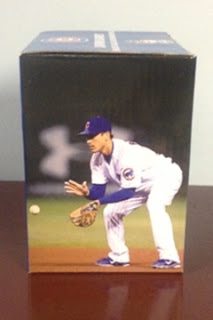 If you'd like one of theses, nearly 50 have been listed on EBay....yeah capitalism!

The only bad thing is that Barney is on the DL and hasn't played a game yet this season. He in AAA Iowa doing a rehab stint right now. Road trip to Des Moines anyone??

No---I'm not that dedicated a Darwin Barney collector!

I also picked up a scorecard and media guide for those collections....posts on those coming later this week.