All the Heritage Inserts

After yesterday's post on the 2009 Banks Clubhouse Collection, I thought it would be nice to see all of the Cubs Heritage Inserts.

There are a total of 70 cards.  Some of inserts have been around for a while, Clubhouse Collection, New Age Performers, Then and Now.  Others didn't have a long run.  Have you heard of Classic Renditions or Grandstand Glory?

Clubhouse Collection...27...The collection started in 2001, though the first Cub didn't show up until the following year.  Cubs have since been in each year except for 2007 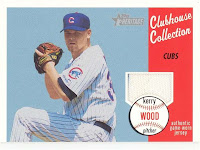 New Age Performer...12...part of Heritage each and every year

Then and Now...12...another Heritage staple, there from the start