Some Packages Were Waiting For Me!

I'm back after a nice relaxing week away.  I was being lazy, but my mailman still had some work to do and there were several bubble wrap envelopes waiting for me...yea!

We've got a day trip planned for today, so not much time to scan or post.  I've got 5 Random Cubs already scheduled for tomorrow, and then I start getting to my new stuff on Monday. 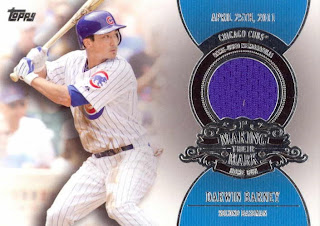 ....the Darwin Barney Making Their Mark relic from Series Two.  Too bad its a blue alternate jersey instead of a pinstriped home uni.

The card commemorates Barney's first MLB home run, which he hit on April 25, 2011.  His blast gave the Cubs a 2-0 lead against the Rockies, which, of course, they failed to hold.  The Cubs lost the game 5-3.

Now let's take a look at the back of the card.  Look at the write-up. 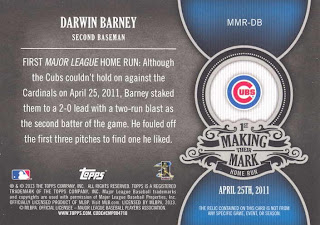 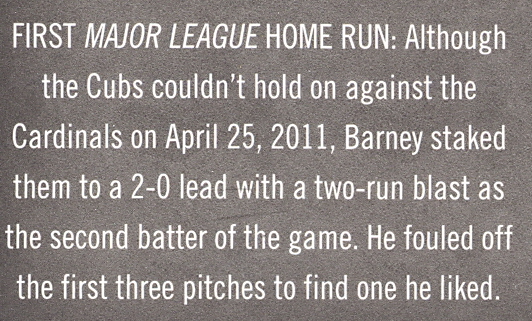 ....which says that Barney hit his homer against the Cardinals.  Unless Baseballreference and my Cubs media guide are both wrong, the Cubs played the Rockies when Barney hit his first homer.

Is this another of the SSP Barney error cards, like the one in 2012 Heritage....or did Topps just screw up...get lazy...not proofread...not edit...act like Topps??
Posted by Wrigley Wax at 9:00 AM