I Waited A While, But Finally Got the Card...Part 3

Today's post looks at my third and final long-awaited card.  This is the one with the longest wait...nearly four years! 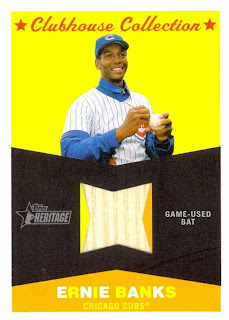 The card is from 2009 Heritage High Numbers, the Ernie Banks Clubhouse Collection card.

Why the wait??
Simple...this card was a ghost card...one of those that you've seen on the checklist, but never anywhere else.

I got back into collecting in 2008.  During that year I got all of the Cubs Heritage base cards from its first release.  When Heritage 2009 came out, I added the base cards to my binder.  Later that year I got my first relic cards, and I decided that since Heritage was a fairly recent brand, I could get all of the Cubs single player insert cards, including the relics (but not the autographs) from the set.  It was fairly simple since most years had only a couple Cubs relics.

I was able to get all of the Cubs cards fairly easily....except for this one.  It was on various checklists, but it was nowhere to be found.  The Ernie Banks Flashback relics were plentiful, as was a dual Clubhouse Collection with Ernie and Alfonso Soriano,but not the solo Ernie Clubhouse Collection.   I set up a saved search with email notification on Ebay and then waited....and waited....and waited.

Eventually I gave up, figuring the card was listed but never made.  It just didn't make sense that an unnumbered relic, even of Ernie Banks, wouldn't show up anywhere.

And then a couple weeks ago, I got an email from Ebay telling me that one was listed.  Even better, it was opening at $4.99, which was a pretty decent price for a ghost card. I was hoping to get a steal, but I also set my snipper at a pretty high price.  I didn't want to let the card get away after a four year wait!

Someone bid the starting bid three days into the auction, but then there was nothing at all. I was really thinking I was going to end up with a bargain.  My snipper fired off with 8 seconds left in the auction and I was the high bidder at $5.24.  Then, with three seconds left, the original bidder came back with a bid.  Lucky for me I set my snipe a little higher than I would have on most cards.

I didn't end up with a steal, but I did get the card.  Sometimes you have to spend a little more if you don't want to have to wait four more years.

With this card, a hole on a page has been filled and I've now got all the Heritage inserts and single player relics.

The rundown on the Cubs...