I Waited A While, But Finally Got the Card...Part 1

For each of the next three days, I'll be featuring a card that I recently added to my collection, but only after an extended wait. 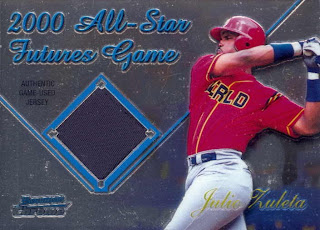 ...this All Star Game Futures Game card of Julio Zuleta.  The card was a part of the 2001 Bowman Chrome set.

Why the wait??
Back in March I was working on my relics collection.  My rule was that if a player had a relic card from a season that he played with the Cubs, I would add that player to my collection.  I had finished up with all the relics that I could find to match my rule....except for this one.

Julio Zuleta did play for the 2001 Cubs, and that's the year this card came out.  The Cubs aren't mentioned on the front, since this is from a Futures Game. 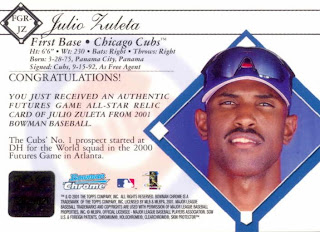 But he is listed with the Cubs on the back, so I figured it needed to be added to my checklist.  These were fairly easy to find, with several on COMC.  The problem was the price.  Most were at least $5.  Now that doesn't seem like much, but its more than I wanted to pay for Julio Zuleta.

I decided to wait for one to show up on Ebay as an auction.  I figured it would take a couple weeks.  Instead, it took nearly four months.  But two weeks ago, the card was listed with an opening bid of 99¢.

I was pretty sure that there wouldn't be a bidding war for the card and I was right.  It was mine for 99¢.  I waited four months and save four bucks.

I can pretty confidently say that this is my last Cub relic....in the sense that its the last one in my binder.  I've got them arranged in alphabetical order, and I doubt that there will be another player that follows ZU...
Posted by Wrigley Wax at 9:00 AM