Another Pack on the Wall

Though I received all my new 2015's from Brentandbecca, there was still one new item I was missing.  I still needed a 2015 pack.  The local Walmart has rack packs and blasters, but for the past couple years stopped stocking the basic $1.99 packs.

Any store that would have loose packs is nearly an hour away.  I wasn't going to make a special trip for just a pack of cards.

On Sunday, I organized a school trip to see a K-Wings hockey game in Kalamazoo.  The trip to Kazoo for hockey meant a side trip to Target for baseball cards.

And Target came through! 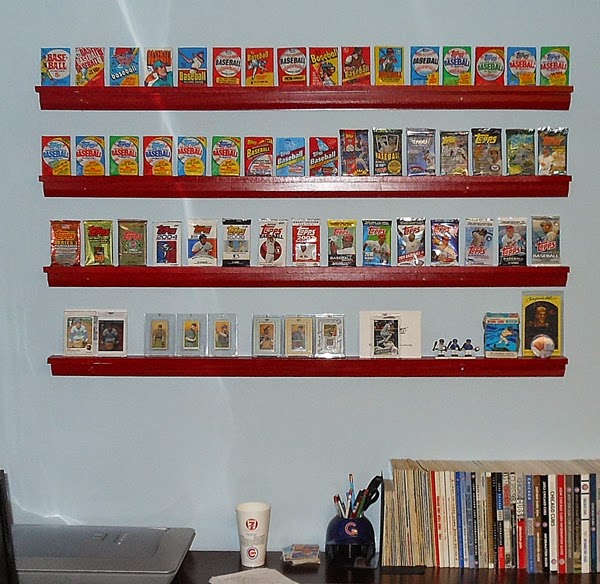 The 2015 pack is the last one on the left on the third row.  The pack on the top right of the top row is from 1969.  Every other year in-between fills the shelves chronologically.  I've now got 47 consecutive years of Topps baseball card packs on display.

This year is a bit of a watershed year for my wax collection.  This is the last time that wax (23 packs) will outnumber the foil (22 packs), with two years, 1992-1993 being cellophane.  Foil will tie things up next year.  My wall of wax is becoming less wax and more foil.

Boo progress!!
Posted by Wrigley Wax at 7:00 AM